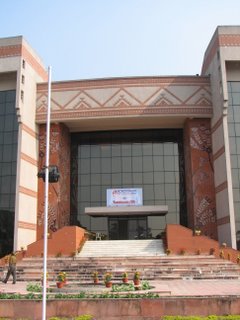 On 23rd and 24th December, I visited IIMC for guest lectures on "OR applications in airlines industry". It went well and enjoyed it a lot, I hope students found it interesting.

I started off by asking students to imagine that they are going to start an airline and think about the things that they would need and decisions they need to make (leaving out HR, Finance, Govt. Permissions).

Students came up with flight schedule, markets, aircrafts. I added profitability analysis (which includes passenger demand forecast), fares. I added that we willl need to take decisions about types of fleeets, aircraft scheduling and crew scheduing. Then I went in details of fleet assignment model and shows some demo using spreadsheet solver.

Later Prof. Nag gave me tour of the IIMC campus. Its beautiful, quiet, lots of trees, apparently it has 7 natural ponds, should be great relief in Kolkata summer. In the picture you can see the auditorium. 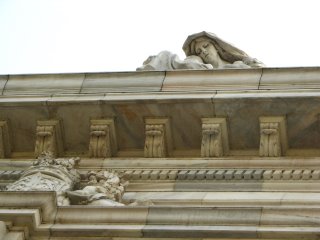 Later, I visited Victoria Memorial, will upload more photos of this 90+ yrs old building made of marble stone. I would like create a 3D model of the building and also understand how exactly it was built in 1912.
Posted by Vijay at 9:39 PM No comments: Links to this post